Reflections on a wonderful visit

The Bloemfontein Children’s Choir is an amateur children’s choir from South Africa consisting of boys and girls between the ages of 8 and 16. Dr Huibrie Verster founded the choir in 1987 and has been conducting and guiding them ever since.

They plan a tour every couple of years and Cantar were delighted to hear from them last year when they began planning their UK tour.

The choir arrived in the UK last week visiting London, Oxford and Cambridge before we welcomed them to York on 3rd July, ready for an action packed few days.

The visit kicked off with an open rehearsal and as soon as they arrived we realised what an extraordinary group of young people they were!  During the next few days there were visits to Millthorpe School, Scarcroft School, Central Methodist Church, The Railway Museum and The Minster and everywhere they went, they never missed an opportunity to sing and delight! They even made a live appearance on the BBC’s Look North news bulletin.

On the evening of 5th July there was a joint ‘Across Borders’ Concert, held at Temple Hall, York St John’s University.  It really was the most amazing and uplifting evening and the Bloemfontein Children's Choir gave us a spell binding performance! All of us in Cantar felt privileged to share the stage with them.

“The Bloemfontein Children’s Choir touches the lives of its members and all whom they come into contact with, leaving positive warm memories to be treasured for years to come”

We wish them all the very best as they continue their UK tour and in particular with their performances at the Stirling Bridge International Arts Festival. We hope they will take back with them the same happy memories that they have left with us, when they return to South Africa next week. 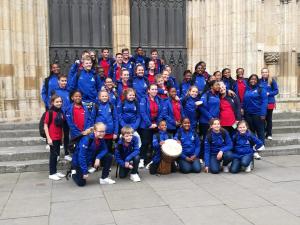 – Made with  in Yorkshire –